My first memories of photography were not pleasant ones. This was in the ‘50s (ie, before the computer age). Even then, folks had trouble with technology. Especially my grandparents. On both sides of the family. My paternal grandfather was the designated photographer on my dad’s side of the family. He always had his camera at our family gatherings. But he seldom remembered to bring a fresh roll of film. So when he ran out of film at critical times, perhaps the only time all year the whole family would be together, my paternal grandmother would become enraged and spoil the entire event. My maternal grandmother, however, always had plenty of film. She had one of those old brownie cameras that you hold at your waist and look down into the viewfinder. The problem was that she was only about 4’11’’. She got the whole family in the picture, but the taller members had no heads. This caused my mother great consternation.

So it was with some trepidation that I picked up my own brownie camera in the late 60’s and took it on my honeymoon to Mexico. Things were humming along just fine until we decided to attend a hai lai match in Mexico City. We locked up our van that had a “Mexico City or Bust” sign in the window and headed for the match. To make a long story short, a thief broke in and stole my camera. As far as I can remember, my beloved camera was the only thing that was stolen. Even our bikes, which we had wisely moved from the bike rack and packed in the car, were intact.

We returned to the US pregnant and camera-less, and I decided that my nascent photography career was finished. I had more important things on my mind. Two kids later we moved to a big house with an unfinished basement, perfect for a darkroom. That and two cute kids inspired me to start shooting pictures again. But I didn’t really like the technology involved in darkroom work. Too much science and not enough art. Plus kid #3 cried every time I took him into the little dark room with the scary red light.

Once again photography returned to the back burner. It wasn’t until the kids left the house (the first time anyway) that I picked up the camera again. I had taken up bird watching and was inspired to take close-up photos of every bird I could. This obsession spread to butterflies, flowers, wild animals, bugs, and landscapes from places as close to my hometown in Portland, Oregon, to as far away as Panama and Australia. My bucket list includes Peru, Tasmania, Poland, Chile, and Argentina. Always with my camera. 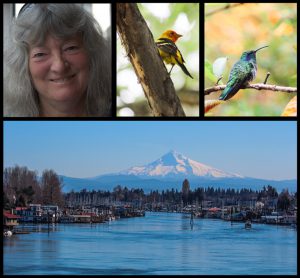 Hi, I’m a fun-loving lady who loves making photographs, capturing beauty and memories. I enjoy spending time with my husband, kids and grand babies. I am fortunate to be able to spend a good amount of time on personal projects, crafts, traveling and collaborating with my business partner Lynn.

I’m originally from Grundy, VA but transplanted to the NW over 40 years ago and now Oregon is known as home. I got interested in photography to capture moments of my children and grandchildren. Scenery, nature and people are my passion. I’ve spent the last 15 years honing my craft of digital photography and Lightroom editing. My book of photography includes nature, graduation photos, weddings and special events. 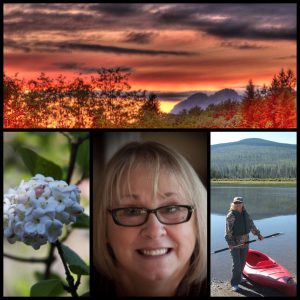